5 ways you didn't know you were going to get hurt

If you play hockey long enough, you're going to get hurt. I don't want to discourage anyone. That's not just the nature of the game, it's the nature of things--Murphy's law if you prefer. Even if you merely played chess, I suspect if you did it long enough, you'd be bound to have some sort of injury. Perhaps, you'd have a contusion from an angry opponent beaning you with their king or you might end up accidentally poked in the eye with the chess board.

Regardless of how safe or unsafe chess might be, there are things you do in hockey to lower your odds of ending up in the ER. Many of these are common sense. Only a daredevil or moron would play without shin guards and elbow pads. Helmets are simply required. Anyone who enjoys the use of their hands once in a while wouldn't play without gloves. While we know the basics, there are some ways to get hurt that maybe you haven't considered. 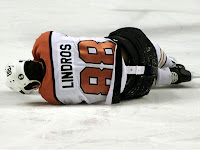 How good is your Helmet really? Both Eric Lindros and his brother, Brett, were forced to leave the NHL early as the result of post concussion syndrome. Many believe if they'd played with their heads up, they would have had longer careers. Maybe a better helmet might have helped as well. Certainly avoiding Scott Stevens would have been a good idea for at least one of them.

Even with the likelihood of being bulldozed by Scott Sevens being pretty low the use of a helmet in itself is pretty obvious. Still, there are some details that you might not know about helmets. Perhaps the most overlooked of these details is the fact that your helmet has an expiration date. There are two stickers on the back of approved hockey helmets today. These stickers indicate the Canadian Standards Association (CSA) and Hockey Equipment Certification Council (HECC) approval.

The HECC sticker is found on every approved hockey helmet sold in the United States and has an expiration date approximating when the helmet will no longer offer an approved level of protection. This is 6 and 1/2 years from production date for all helmets, but typically ranges about 4 or 5 years from consumer purchase to expiration. You probably didn't know that anyone under twenty-one years old could be barred from participating in a game as the result of an expired HECC sticker. All players in leagues and venues following USA Hockey rules are required to wear an HECC approved helmet.

The CSA sticker indicates the year that the helmet was produced and is found on all helmets sold in Canada. The lack of the CSA sticker will automatically preclude a player from participating in a youth hockey game in Canada. While CSA stickers do not have an expiration date, the 6 year rule is still a good one to follow.

If your helmet doesn't have either of these stickers it is probably close to fifteen years old. For the last ten years HECC has been putting the expiration date on their stickers, so if you have an HECC sticker without an expiration date, your helmet is definitely expired. The CSA stickers have only shown the manufacture year since 2008. While some of the items below are pick and choose, I cannot think of a single good reason to play in an expired helmet or to skimp when buying a new one. 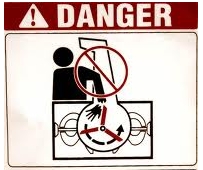 You might not remember Joe Sakic missing almost half the season the year after the Avalanche won their first Stanley Cup. My reference here has nothing to do with the notorious snow blower incident. Rather, it was the result of a skate blade cutting his calf nearly to the bone. Whether you remember or not, pro players are aware of this and numerous similar injuries. Over the last several years many NHL players started wearing socks made from Kevlar, the same stuff as bulletproof vests. 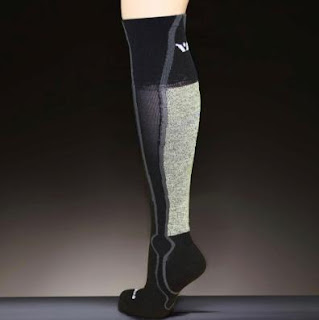 Again, I know you don't play NHL hockey. But here's a tip: even a total novice can step on your leg with sharp skates. Lucky for us, there are a couple types of Kevlar socks on the market today. One is a skate sock with Kevlar protection from the ankle to the knee. Despite my pessimism about how comfortable a bulletproof skate sock might be, the Swiftwick pair I own is far and away the best pair of  socks I've ever owned.

The other type is a cut resistant hockey sock (over the shin guards). There are a few brands making these.
Because Kevlar cannot be dyed, these socks feature either a traditional, yarn-knit exterior or a polyester shell. While you can get pretty much any team colors, I find that the Kevlar skate sock makes more sense than the Kevlar hockey sock. The exterior section of your Kevlar lined hockey socks is going to get torn up and you're going to have to drop $40 to replace them. Your skate socks, made mostly of Kevlar are going to last longer and cost less.

In the glory days of the Avalanche/Wings rivalry (go ahead Wings fans, email me how it wasn't a rivalry since your team was too good to have rivals. It won't dampen my opinion that they hated each other) . . . Kirk Maltby gave Valerie Kamensky a hard whack with the lumber and broke his wrist. I remember watching that game and finding it one of the most gruesome sports injuries I ever saw. 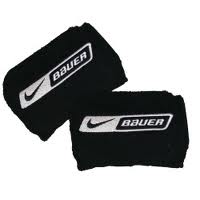 Slash guards are a great piece of gear to bridge the gap between gloves and elbow pads. Would they have saved Kamensky from missing two months of hockey? Is someone going to get mad and slash you like that? Got me, but after seeing Kamensky's forearm folding up in a rather unnatural way around Maltby's stick, I don't care. There are angry guys playing hockey at every level I've seen. Slash guards are a good idea. A pair of slash guards goes for about fifteen bucks. I'd guess a trip to the ER for a broken wrist goes for at least 100 times that much. 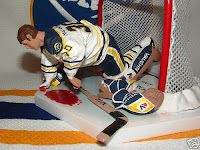 Our friends north of the border (I'm talkin' about Canada, not Wyoming) require all youth hockey players to wear a throat guard. There's a reason for this. If you didn't believe that skates cut skin when I was mentioning Kevlar socks, you should google Clint Malarchuck (don't say I didn't warn you, the pictures and video are graphic. They show a former NHL goalie nearly bleeding to death on the ice). Miraculously Malarchuck survived, but how many army, combat-trained paramedics are hanging around your game to save you? 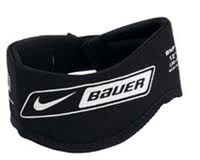 Yes, that's a plastic toy in the picture above commemorating Malarchuck's near death experience. There are plenty of pictures on the net of the actual event, but frankly I think they are a bit to graphic for my purposes. My goal is to educate, not horrify. I've actually met two people who have had near death experiences with huge gashes just missing their carotid artery or jugular while playing recreational hockey. Ten to Twenty dollars for a Kevlar neck guard could literally save your neck. Seems like a tiny price to pay.

Skates have never been great for absorbing or deflecting the force of a fast moving puck. Daniel Sedin (the funny looking of the Sedin twins) missed several games in 2007 with a foot injury after being struck by a puck. In 2009 a slapshot from teammate, Alex Elder, broke his foot. (Who needs opponents with a teammate like that, right?) In true hockey player fashion, Sedin did finish the game with 3 assists after the injury, but then missed five weeks while it healed.

Skate fenders are a pretty new invention. They've become increasingly popular in the NHL over the last few years, with skyrocketing numbers of players this season. Just google, "NHL broken foot" and you'll get an idea why everyone is running out to buy a pair. After three weeks in a row of taking a slapshot off the laces, I sprung for a pair. They are well worth the $80 price. Made of lightweight Lexan, it's impossible to tell they are even on my feet when I'm skating. More importantly, I haven't felt the sting of a puck on my feet since picking them up.

Do I really need all that?
I'll be the first to admit that not everyone needs everything on this list. I use Kevlar socks and a neck guard when I play goalie. I'm loving the skate fenders when I skate out. I do have a $180 helmet which I will replace before it expires. There's no excuse for not having a good helmet.

My advice is to consider how you play and be preemptive. If you block a lot of shots, pick up some boot fenders. If you make a lot of people angry you might invest in wrist guards. If you lay down at center ice for frequent naps, you might want everything on the list. But consider this, if you spent the money for everything on this list, it still wouldn't cost 10% of what an ER visit might. Further, there just isn't enough good television to keep anyone properly entertained while they convalesce for several weeks on the couch. Just a thought.

Find us on the web at www.rocketskate.net
© 2013 Scott Noble
All Rights reserved. Reproduction of this article in whole or part is strictly prohibited without the author's prior express written permission.
Posted by Scott Noble at 8:19 PM 3 comments: