Six Pieces of Hockey Gear You Didn't Know Could be Repaired

Gear breaks. That's just part of hockey. There's good news though. Not everything which breaks needs to be replaced. Hockey is expensive enough without having to buy new skates every time a rivet pops loose. Here's a look at some things that you might not have realized Rocket Skate can repaired. One of the best things about getting your gear fixed in our shop is our quick turn around time. Many repairs are same day, most are done in two days maximum. We're also happy to give you honest advice on whether it's better to retire Great Grandpa's hand-me-downs than to repair them.

Busted Stuff on your skates
Unfortunately there are a lot of things that break on skates. We all know it isn't fun spending a lot of money on a new pair or breaking them in. Fortunately there are a number of things on your skates that can be repaired. Most people do know that eyelets and rivets can be replaced, but did you know that you should fix both of these as soon as you notice a problem? The longer you wait on these two issues, the worse and more expensive the repair becomes. Here are a few items on your skates that you might not realize can be fixed.

1. Tendon Guards
The tendon guard is a pretty important part on your skates. It's that funny piece sticking up in the back which keeps people from cutting your Achilles tendon (hopefully). While I definitely don't recommend playing with broken tendon guards, I personally go a step further and wear the excellent, Swiftwick hockey socks which feature cut-resistant protection. However, we can fix broken tendon guards as well. We've got a new process that works great and is very affordable at only $29 a skate. These require sewing your lining back in place, so the turn around time on this is typically 24 to 48 hours.


2. Broken Holders/Runners
I've heard of people replacing their skates because of a broken runner or blade holder. If you spent $50 on low end skates, this might be the logical way to go, it's never the only choice. Replacing runners is the most common repair we do here. Sometimes we're swapping out one that broke from a shot. Sometimes they old blades have just been sharpened so many times that there isn't enough steel for them to perform properly any more.

Once in a while we get a pair of skates with blades so worn down that they won't fit on the sharpening equipment anymore. Honestly, if you've gone that far, you've been skating rather poorly for a while. There comes a point where the blades are so short that it's impossible to take a sharp turn without that boot thingy they're attached to hitting the ice. When a skate boot hit the ice, it is generally quickly followed by a skater hitting the ice.

The good news is that most skates over $200 have holders which will take new runners. If you see one or two screws securing the blade in the holder, the blades are replaceable. But don't panic if you don't see them; it doesn't absolutely mean they aren't. Some Bauer holders use hidden screws which go through the sole of the boot rather than the sides of the holder to secure the blade.

If you have a broken holder, typical replacement cost is approximately $35 including installation. Holders are a pretty quick replacement. We try to have these done in a hour (as long as we don't have a bunch of other repairs on our plate). Most Bauer, CCM and Reebok sizes are in stock. We can even retrofit holders if you have an older skate with a discontinued holder or an off brand skate.

Runners are only sold by the pair. We stock all popular brands of runners. Standard stainless runners cost from $54 to $69 (depending on model). Our prices include installation and sharpening.  There are a number of special order upgrades possible on runners, including lightweight Titanium runners, Black Carbon coated steel for reduced friction and Polished Stainless for a mirrored appearance. These vary in price. Runners can generally be installed while you wait as this is a pretty quick process.

3. Skate Tongues
A bad tongue on a new skate or a worn out one on an older one can make you crazy. There's probably nothing worse that your skate can do to you than give you lace bite. If you've ever had it, you know. If you haven't, imagine the top of your foot turning red, puffy and so tender that you don't even want socks touching it.

Replacing tongues is a relatively simple process. We remove the old ones and hand sew in a new pair of high-quality, aftermarket tongues with 48 ounce felt (that's nice and thick). If you bring us a pair of tongues, it's $29 labor. If we supply the tongues you're looking at $79 total. Turn around time is typically a couple hours on these.

Protective Gear
Protective gear is prone to breakage as well. Fortunately, we can repair most of what goes wrong with it as well.

4. Gloves (Goalie Gloves too!)
We also offer glove repalming and repair at Rocket Skate. Glove repairs are generally completed in 24 to 48 hours. We'll let you know when you call or drop them off how long it will be, then toil furiously to make sure we make that deadline . . . OK, we'll only toil furiously if that's what we need to do to make the deadline.

Player glove repalming
Most people have heard of glove repalming, but few really seem to know how well this works. Repalming a glove entails the removal and replacement of the entire palm of a glove, as shown below. 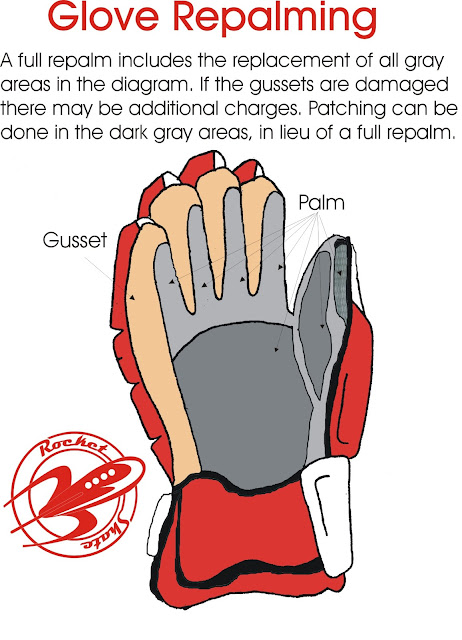 While gloves can be patched if you have small holes, a true repalm will replace entire fingers, palm, and thumb portion where the stick comes in contact with the stick. For most players, only the top hand needs to be repalmed. If the rest of the glove is in decent shape, a $29.99 re-palm will generally double the life of it.

We use reinforced, clarino palms at Rocket Skate. These are a spun polyester material with the feel of thin, glove-suede leather but a significantly greater durability than natural leathers can achieve. So repalmed gloves feel like new too (on the palm side anyway). We do include minor gusset and padding repair on gloves while repalming them as well. And of course we will let you know if they will require any additional charges before we start the work.

Goalie blockers
Blockers come out great when they get repalmed. Repalming isn't even really the most accurate word for a goalie blocker. Goalies get an entire new glove attached to their blocker. Like the player palms, we use clarino goalie gloves which have an awesome combination of durability and feel. Traditional blockers cost $44.99 to repalm. TPS style blockers with padded fingers (similar to those on a player glove) are $64.99.

Goalie Catch gloves
Fixing a catch glove isn't quite as straight forward as other gloves. Frankly, no two seem to break the same way. We do offer re-lacing, reinforcement and all other repairs. Most repairs on trappers will be done in a couple days. However, we might have to order materials in the proper colors for major repairs, so it's best to swing in for a quote and turn around time.

5. Pants
Pants wear out. It might be because you sit on them. Hopefully it's because you're playing hockey in them through. Here are some of the common ailments we can cure in hockey pants.

Suspender buttons
Buttons are a pretty easy repair. We can do these while you wait. They only cost a few bucks a pop. ($4 if you want to get specific). Of course having your pants fall down in the middle of a game would be priceless.

Belts
Belts are another pretty quick repair most of the time. The main thing to remember is that you shouldn't take your old belt out if you have an internal belt system like most new pants use. As long as you leave the old belt in place, this is another on the spot repair most of the time. Some pants do have sewn in belts which will require an overnight visit to the sewing machine.

Sewing
We can also fix ripped seams in your pants as well as patching of worn out areas. We do stock 420 denier nylon and pant crotch material in black so most pant repairs can be completed in 24 to 48 hours. 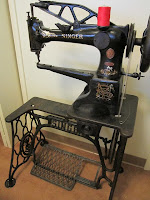 6. Straps
Gear straps are a pretty common repair as well. Velcro and elastic wears out. It's just something that Velcro and elastic does in general. Typical strap repairs run $5 to $10 a strap. Your new straps will be custom fabricated to fit your gear. Whether it's elbow pads, shoulder pads or shin guards we can keep them alive a little longer with a new set of straps. This repair will take 24 to 48 hours normally.

We also repair and replace goalie leg straps. We stock several types of leather leg straps in the shop. Most leg straps are not sewn in and can be changed in a few minutes. This style of strap runs $10 including installation. Sewn in straps are generally repaired by hand in the store. These take thirty minutes or so and cost $15 to replace.

Conclusion
If you've got broken gear, the odds are good we can fix it for you. I've listed some of the common items we fix here, but we've fixed everything from horse blankets to putting new knee cups on shin guards and augmenting shoulder pads. We love a good challenge once in a while. Feel free to swing by and try to stump us.

The prices in this article are effective as of July 2013 and may change slightly as material prices increase.


© 2013 Scott Noble. All Rights reserved. Reproduction of this article in whole or part is strictly prohibited without the author's prior express written permission.
Posted by Scott Noble at 4:34 PM No comments: