Too Disgusting to "Stay in the Room"

The locker room is supposed to be a hallowed place where guys can be guys and not worry about the repercussions of their actions. There's a saying, "What's said in the room, stays in the room." Really depending on the context of that, it isn't a bad thing. If we're looking at hockey as therapy being able to vent your frustrations without fear of having someone tell your boss you want to punch him in the eye, it's kinda like doctor/patient confidentiality. Honestly, we're hockey players. A broken foot or knocked out tooth is only worth missing a few minutes of hockey (even if we're only watching on television). If we're gonna just tape up a major physical injury to get back on the ice why would we go see an actual therapist for our mental issues when we can just grouse about them to our peers? In that context, "what's said in the room stays in the room," only seems like common sense.

That in mind, I'm not going to break the rules. Instead I'm going to address the elephants in the room. I'm not gonna name any names, but you know who you are and maybe there's more than one of you. So take this to heart: hockey players, we can be a disgusting bunch, but you've taken it too far.

Disgusting Guy #1 - There's a urinal 15 feet from the shower. It's that thing mounted to the wall that you pass on your way to the shower, in fact. It's white, made of porcelain and if by chance it is being used, there is a toilet right next to it. The shower is not a urinal. Are you so lazy you feel like you need to multitask? Do you think that it's OK to pee in the shower because you do it at home? Do you think we just don't notice the smell of urine and the yellow tint to the water? The three other guys in the shower would appreciate if you acted less like a three-year-old. 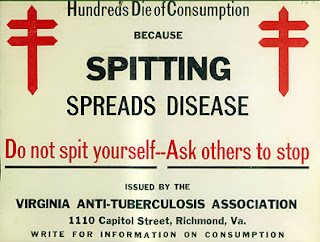 Disgusting Guy #2 - Spitting goes in sports for some reason (especially if you count baseball as a sport). In hockey spitting on the ice is apparently kosher. The floor of the team bench is a pretty gross place for it . . . but you, Disgusting Guy #2 have taken spitting to a new level. You're the guy who hocks loogies on the locker room floor. Do you like stepping someone else's phlegm? Do you spit on the floor in your bathroom? Ever heard of meningitis? Think man! There are people walking about in bare feet and somehow you think spitting on the floor is okay. We'd almost rather have you hit us upside the head with a hockey stick than spit on the floor.

Disgusting Guy #3 - The only good thing is that you leave the room to engage in your odd behavior. It's also the bad thing. The street behind your car in broad daylight is not the proper place for you to change your clothing after hockey. Did someone pee on you in the shower? Did you step in some spittle in the locker room? Are you actually trying to be tagged a sex offender for flashing children and women with your odd decision to change your clothes in public? There's a private locker room which you can use if you have issues with the people and/or actions taking place in the public rooms. Don't terrorize the locals please!

Guys, please think about where you pee and spit please! I'm pretty much the last guy to get angry, I've never punched anyone in all my years of hockey, but Disgusting Guys #1 and #2 make me understand why people get punched. If you don't think that your bodily fluids are disgusting (even though they are), the last thing the world needs is a bunch of old men getting dressed in the street after hockey. Disgusting Guy #3, as long as you didn't tell someone's boss they were about to get hit in the eye, the locker room should soon be safe for you again.

This has been a public service announcement. It might save your life . . . probably not.

Find us on the web at www.rocketskate.net
© 2013 Scott Noble
All Rights reserved. Reproduction of this article in whole or part is strictly prohibited without the author's prior express written permission.k.com
Posted by Scott Noble at 10:15 AM