Just what is muscle memory?
I spent a fair amount of time talking to a customer today about muscle memory. It was clear when I was done that that they didn't get it. Hopefully I'm a better writer than orator, because I'm going to try to make sense of it here. 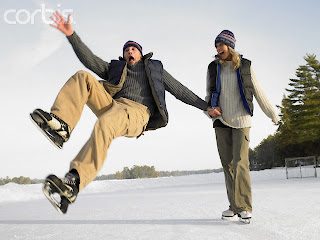 Gross motor skills, on the other hand are things that we do with minimal thought. These are actions such as standing, walking, even jumping and kicking. While fine motor skills require a conscious thought and planning, gross motor skills happen pretty much automatically. These are almost as automatic as breathing and blinking the normal person.

How does it factor into skating?
Unless you were that rare mutant individual born with metal blades protruding from your feet, skating wasn't exactly natural when you first started, remember? But now that you've been doing it for a while it's developed to something that's pretty much as simple as walking. Don't get me wrong, it will always take a lot of thought for a figure skater to launch and land a triple axel or a hockey player to carry the puck through the defense with a spin move. But just going out and taking a few laps around the rink doesn't require watching your feet I hope.

So let's back up a second and talk about how gross motor skills and how they change. We've all seen growing kids go through crazy awkward states where they are so uncoordinated their limbs seem like their mortal enemies at times. And yes, even though I remember my young self as the acme of athletic grace, apparently we were all that kid at one point. So just what is the issue with the poor kids in this state? Simple they are growing so fast they they have to readjust their gross motor skills to adapt to bigger feet, and longer legs, arms, torsos and heavier heads (It's possible that I made up that last one).

If your skates fit properly, they are an extension of your body. This means that when you get a new pair of skates, you're essentially going to go through that brief awkward growth spurt where you need to readjust your gross motor skills. I'm not going to go into a lot of detail on what might be different from one skate to the next as I did that in two previous blog entries here. But I will point you in that direction in case you missed them. Check out - Decaffeinating the Horror of New Figure Skates and/or New Hockey Skates, tougher than your feet? if you want more info on what changes from one skate to the next.

So what should I expect?
One of the amazing things is that even putting on the same exact model and size of skate is going to often require adjustments to your gross motor skills. Skates are still primarily made by hand. As a result, no two skate boots are exactly the same. The blades, also installed by hand on every pair of skates, aren't always in the same place. This means, that while the adjustments are going to be smaller when staying in the same model and size, there will still be some.

Perhaps a better way to explain this for an adult would be to compare it to an injury. Let's say you've broken your foot. In fact let's say you've done such a number on it that the only way they can set the bones results in your foot being turned outward, off by 90 degrees from where it should point. Yes, once you've gone through rehab and learned to walk again, you look like half a Charlie Chaplin impersonator. Then after a many years go by and you're tired of people pointing their finger at you and laughing, you find someone with an actual medical degree who can fix your foot so it points the proper way. The adjustment to walking on your foot which now points in the proper direction might take less time than it did after the first injury, but there will still be an adjustment. Your gross motor skills would take weeks, or even months to re-map your newly aligned foot and walk naturally.


On skates we balance on a blade which is a mere eighth inch wide for hockey or three sixteenths inch wide for figure skating. The tipping point between your foot being neutral and off balance can be as little as half the width of that blade. Think about that. If your blade is off by a mere sixteenth of an inch it could mess up your skating. Further, the older we get, the less adaptable we become to these changes. I'm chalking it up to the fact that we haven't had a growth spurt for a long time, but I'm guessing there are other factors involved.

The Verdict
Don't get frustrated if your new skates don't feel perfect right away. Anyone who has bought a few pair knows this is the case. Just like you'd have to adjust if I replaced your feet with a different pair (not that I'm qualified or interested in doing that) you won't entirely have to re-learn how to skate. Sometimes the gross motor skill adjustments will be slight and this is typically how it should be. However, even slight adjustments can take weeks to make. It took six weeks before my last pair felt natural on my feet, but I did switch skate brands.

If the adjustments are serious you're probably going to need some help from your friendly pro shop staff. Blade alignments can help both figure skaters and hockey players. Sometimes it's just a matter of shifting the blade. Of course if you bought your skates from us, we're going to take care of getting that fixed for you. If you bought them elsewhere, we can help with that too, it just isn't included in the price.

Find us on the web at www.rocketskate.net
© 2013 Scott Noble
All Rights reserved. Reproduction of this article in whole or part is strictly prohibited without the author's prior express written permission.
Posted by Scott Noble at 6:35 PM