Change seems difficult. . . but is it really?

Being old school carries its own brand of cool. There's a certain respect reserved for a guy who shows up with a Cooper helmet, Daoust Skates and a pair of all-leather Flak gloves that ride halfway to his armpits. When he falls on his head and ends his adult hockey career with a concussion abetted by his twenty-five-year-old helmet, that respect quickly turns to pity. We don't have to like it, but sometimes we have to suck it up and make a change.

I'm dealing some change at Rocket Skate right now. I've had two employees who have been with me for three years each. Sophie is a recent college grad who took her first career job in Georgia (a tad too far for a commute to Lafayette, Colorado). Ally is beginning her college career majoring in music and playing women's hockey (which doesn't leave much time for work). I'm proud of both of them as they move forward in life and embrace change themselves. On the other hand, it's difficult for me to replace their six years of experience. They're also like family after three years which is even harder. So yeah, I'm feeling a bit resistant to change right now.

Of course that's not the kind of change that I mean to discuss here. More relevantly, new elbow pads have been on a lot of minds lately. I've had a number of adults and kids in the last few weeks who looked at elbow pads and simply couldn't make a decision--to the point that it's even amusing. With most of them trying on half a dozen models before becoming frustrated since nothing felt like their old pair, it seems like they just might be Primadonnas, right?

Actually I can totally sympathize. We get really attached to our old gear. It's familiar, it's comfortable and, in general, humans dislike change. I myself clung to my first pair of elbow pads longer than any other piece of my worn out gear. Unlike current models, they had no bicep protection. They were literally half of what elbow pads are now. When I finally bought a newer models I quickly developed an irrational fear of this newfangled addition. They were as uncomfortable as a that pea I once endured under 15 mattresses. Thus they hung in the garage for many weeks, unused.

Eventually, I was run down by a rather large player twice in a row. On the first bump he managed to re-position my elbow pad. In an act of impressive dexterity he managed to crush me a second time as I was still readjusting that elbow pad. The second collision sent me down and knocked me on my still un-padded elbow in the process. A big fan of not having broken elbows, I wore the new pair the next time I played. I was fearful I would be a drooling pool of insanity before the game was over. I forgot that I had new gear on by the second shift.

So what's the big deal? Why are we so opposed to change? I have guys who refuse to try a composite stick even though some of them in the shop are as cheap as a wood stick. Do they realize they're using hundred year old technology? 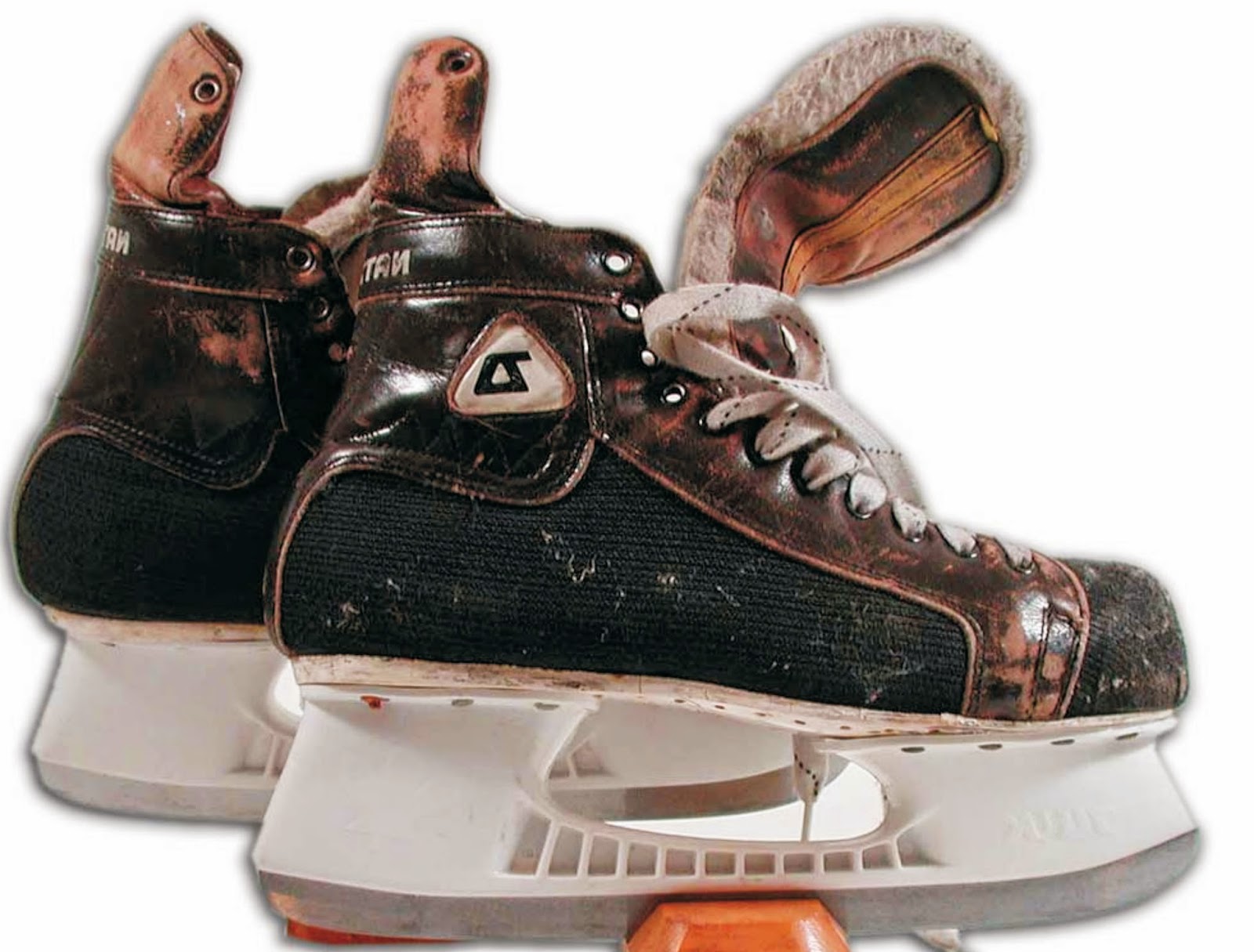 There are other guys clinging to the shreds of what were a nice pair of skates twenty-five years ago. I'm sure they're comfortable. So are a pair of slippers, but you cannot skate in slippers. You can barely skate in a pair of skates that are so old they offer all the support of a pair of Converse Chuck Taylor high tops.

I constantly see helmets from brands that haven't existed for ten or twenty years, shin guards that adults first used in junior high and gloves that look like they should be autographed by Rocket Richard or Gordie Howe.

The craziest part of it is many of these guys are perfectly willing to shell out $5000 for a new mountain bike. I might be old school when it comes to bikes. My thought is for that amount it should have a gas tank with the word Honda or Yamaha on it. The closest thing to a pedal you should find on a bike that expensive should be a kick starter.

We all know hockey isn't cheap. But that's just part of the problem. Fear is often the biggest factor--specifically fear of change.
"But I wore that helmet in my high school championship!"
"Great! By all means put it in a polycarbonate box on the shelf in the den, but don't keep using it to protect your brain!"

New gear feels different It's true. But it also has a lot of advantages over your old stuff. Here's a few things to thing about:


Interestingly as I was driving to work on the day of Sophie's last shift, a snow white dove flew across the street right in front of my car. I've been around for a while and I've never seen a white dove in the wild (let alone in suburbia). Even if you aren't a spiritual person, you likely know that the dove is a symbol of peace. While this one didn't have an olive branch in its beak (as far as I could see), it did feel like a little reminder from the Almighty that everything was going to be alright. I've found myself reinvigorated and excited about the challenges of training and developing my new employees, who I fully believe are going to be awesome at their job.

So here's the bottom line. Stop being afraid! For the sake of all that's good, you're a hockey player! Why are you afraid to try something new? I'm gonna make it easier for you too. Just mention this article during August 2014 and I'm gonna give you 10% off one piece of new gear just for acting like a hockey player by being brave. I'm pretty sure you're not going to regret it. Much the opposite, it might reinvigorate your tired hockey game. Personally, I seem to go on a scoring tear every time I get a new piece of gear.


© 2014 Scott Noble. All Rights reserved. Reproduction of this article in whole or part is strictly prohibited without the author's prior express written permission.