The Road to the Doghouse

She sat beside me in the car as it crept slowly eastward on the snow-covered tarmac of I-70. Traffic was light, but that was because of the blinding blizzard which we were braving. Only the intrepid and foolhardy were making this trek. I'd count myself among the former; she would have insisted I was the later. I'd mistakenly believed conditions would be better once we'd made our subterranean crossing of the Great Divide through the Eisenhower Tunnel. Disappointingly, the swirling barrage of white did not abate on the Atlantic side of the continent. My only real fear was that they'd close the highway before we made it though. 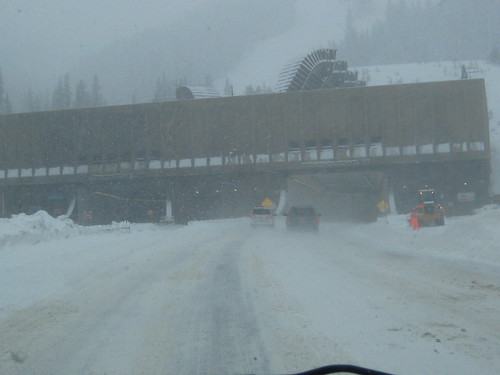 “I don't know how to make you understand,” I told her.

“Maybe I don't want to understand.” she replied. “Maybe I just want to take a weekend trip without the car smelling like cat urine. . .”

“ . . . maybe I want you to think about our safety instead of about missing your game. Maybe I would have rather taken a sick day tomorrow and skied another day than ride home in a blizzard because you want to play hockey. And you're right, cat urine smells better than your gear.”

“That's a lot of maybes. You don't sound too sure of what you want.” I shouldn't have said it. Even though my tone was even, I'd carefully aimed the words knowing they'd push a button.

She was quiet for a moment. The only sounds were the rush of air from the Land Cruiser's defroster, the hiss of snowflakes bouncing off the windshield and the crush of snow under the tires. I always turned the music off while driving in the snow. This was partly because I enjoyed the silence of a snowstorm, partly because I wanted to concentrate on any loss of traction in the car.

Almost a minute passed before she muttered, “You planned this. Otherwise you wouldn't have brought your gear. You're a jerk.”

In twelve years of marriage, it certainly wasn't the worst thing she'd called me. My reply was halfhearted, “Sorry. But you are giving me too much credit if you think I control the weather. Remember, I packed my gear so we could maximize our time skiing.”

“Woohoo! So we got what, an extra fifteen minutes of skiing? Explain it too me again why our personal safety is less important than a game?”

I sighed. The number of times I'd explained it was beyond counting. “I don't want to fight.”

“Neither do I. I just want to understand.”

“A moment ago you said you didn't want to understand.”

“I said maybe I didn't want to understand. Anyway, I'm allowed to change my mind.”

“I don't know what there is to tell you that I haven't already said. It's about more than just me. There are twenty or thirty guys expecting me to be there. If I don't show up the game will be ruined. Those guys all paid money to play. It's unfair to everyone if I don't make it.”

“And those twenty or thirty guys are more important to you than I am?”

“Of course not, I didn't spend the weekend skiing with any of them.”

I don't know if she accepted this answer, but she moved on. “They seriously cannot play without you?”

“The game is no fun without goalies.”

“I still think you're just being conceited. There's got to be someone else who can do it.”

“Honey, I called eight goalies before we left and none of them could fill in. There was no one left to call.”

“I know. You were on your phone every time we were riding the lift instead of talking to me.”

“That's a serious exaggeration and you know it. Besides if I hadn't been on the phone you'd be mad at me for not trying to find a substitute. You need to have more realistic expectations. I planned to come home in time for my game from the start and we're just sticking to the plan. I did try to change it for you it didn't work out. It isn't like any of the guys on my team have goalie gear, you know.”

She acquiesced, turning to look out the passenger window after mumbling, “I just think it would have been nice to stay one more night. I was looking forward to a good dinner, some time in the hot tub and powder covered slopes in the morning. If you'd rather play hockey until midnight then get up early for work tomorrow morning, that's your call. But clearly your priorities need some adjustments . . . whatever.”

Whatever, it was a clear signal that we were done speaking. She said she didn't want to fight, but couldn't resist a jab at the end. There was no way for me to explain it. She didn't play; she'd never understand. It was nearly inexplicable to those who didn't love the game. She'd never even liked it as far as I knew. Honestly, she probably viewed the game as “the other woman.”

I pulled up to the house an hour and a half later. The snow had let up at Idaho Springs and though it was cold when got home, the only frost was coming from the passenger seat. As the garage door slowly yawned open, I thought she might finally speak. The house rule was we never went to bed angry. Since she'd certainly be asleep before I got home from my game, an apology seemed in order. This was not the case. As soon as I pulled into the garage, she exited the car, retrieved her luggage from the back and wordlessly lugged it inside. Apparently the fact that she was going to bed and I was not, was a loophole. This night there was no we.

It was almost ten o'clock. I wanted to go inside, to sort things out. It seemed the rational thing to do. But my game started in thirty three minutes. I was barely going to make it. I hit the steering wheel with my fist. I knew if I went in there was going to be a fight. It would be an act of God if that fight only took thirty minutes. There just wasn't time. How could I fix something in ten minutes that I hadn't been able to explain in twelve years?

I turned up the stereo, jammed the Land Cruiser into reverse and roared out of the garage in a rage. After a near miss with my neighbor's passing car. I drove quickly, but a little more calmly, to the rink. The only solace I would find this night would be in the game. Yes, the game would clear my head. I actually hoped for a lot of action around my net. I could use some jostling in the crease. A chance to shove some people violently out of my way—yeah, that would make me feel better.

I pulled up to the rink with twenty minutes until faceoff. Perfect. I'd have fifteen minutes to get dressed once I lugged my gear inside. I tossed my leg pads over my shoulder, hefted my gear bag out of the trunk and picked up my sticks. Toting fifty pounds of gear, I crossed the parking lot, my anger subsiding into thoughts of the game. I passed through the rink doors where a sleepy looking kid manned the front desk.

I asked him, “What locker room for The Mighty Drunks?”

He lazily scanned a sheet on the desk before asking, “The Mighty Drunks?”


© 2015 Scott Noble. All Rights reserved. Reproduction of this article in whole or part is strictly prohibited without the author's prior express written permission.
Posted by Scott Noble at 10:05 AM